Another week almost over and I’m another step closer to a full and total meltdown.

I’m almost certain my kids are conspiring against me, in some dastardly plan to take full control of our humble abode and leave me cowering in a corner mumbling incoherently about babies, poo, lego and coffee.

I had, foolishly so it seems, started to think that with the boys using the loo and potty as well as they do that I would no longer have to walk around, eyes to the floor checking for any puddles of wee or soft ‘n’ squidgy poos.

Yeah, I was wrong.

The week has been all about butts.

If they haven’t been letting rip the most nasty noxious bottom burps ever known to man, they have been leaving presents {not the nice kind} strategically placed around the house for me to find.

In my bare feet.

Nothing quite like skidding across the floor in a puddle of wee or stepping in a pile of steaming kiddie poop, almost on a par with the time I stood on a slug, in my bare feet.

{I don’t like slugs, I don’t see the point in them, ewww ewww ewwwwwww}

I’m not sure what the heck is going on but I’m ready to slap some nappies back on their arses if this goes on much longer.

Some of this weeks highlights include

A train filled with wee!

One of the boys apparently sat on the loo seat backwards and missed the loo completely, who does that?!

They could have halted the hose pipe ban after all the ‘water’ the boys have donated to the cause via the garden.

Someone, not naming names {Ahren or Ethan} had a tinkle on the carpet upstairs,

and on the floor in the playroom.

But the highlight, the absolute pinnacle of a crap week {pun totally intended}, was me trudging upstairs to empty the potty.

I was almost to the top when for reasons unknown I decided to trip over my own feet, which admittedly made a change to falling down them.

Anyways in slow motion I see the stairs coming towards me, think ‘Ahh ha! I did a jolly good job vacuuming the stairs’, as I look upwards I see a golden arc, not the arches of Mc D’s, but an arc of pee ready to splash all over my stairs swiftly followed by poop plops.

As I lay there on the stairs, I debated just sliding down the stairs on my tummy like we did as kids, pleading ignorance / innocence to the hubby when he comes home from work and finds the stair’s new decoration. Then realise that if I’m up against the boys in the whole blame game, they are likely to win and I would look really rather disgusting.

So I clean up the mess, deciding once and for all we need an outside loo and need to remove the carpet from the stairs.

You would think this would be the end of my shonky moments for the week, but no, the kids top it off by deciding their camera needs a wash.

In the paddling pool

Ahren does the whole “Ta dah” thing as he bellows

I spin around to see him lift the camera out the pool, water is just dripping out the blasted thing.

I quickly decide to chuck the thing in rice {I saw it somewhere as a way to dry off things}, not wanting to use the ‘good' rice {I remembered a thing about rice crops being poor and prices going sky high} so naturally I grab the draft excluder rip the thing open and bung the camera and rice in a tub.

I think the camera is well and truly buggered, which is a shame as Ahren was actually really getting into his photography in a way that only a 3 year old can.

Seriously, he would crawl along the ground to follow an ant just to snap a photo of it, dedication to the cause!

We ended the week on high, my sister came for a visit, naturally we took her to beach for a paddle in the sea.

We saw a totally hardcore little lady go for a swim in the sea, its still bloomin’ chilli water round here. 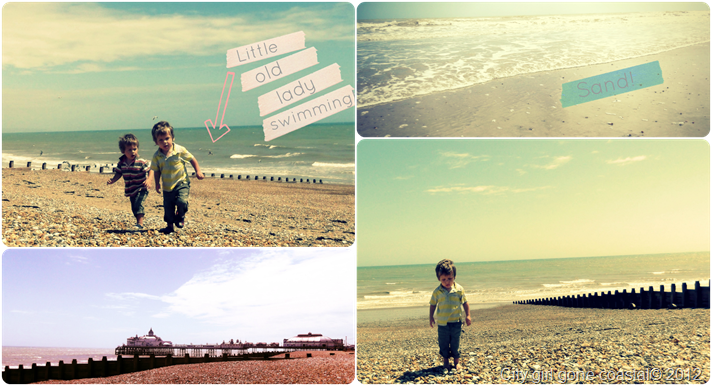 And naturally, being the totally sensible mother that I am, we pretended the buggy was a pirate buggy and pushed it along the water edge!

It was a pretty low tide, and the boys loved it, not sure the sight of us calling out

did much to enhance my already tainted standing within the neighbourhood!

Ahh well, at least there was no poop involved!

RANDOM: For some unknown reason we are watching ‘How It’s Made’ {on a Friday, living the dream}, for some reason they think we want to know how Tapioca pudding is made!

I have a few issues with this

1} Does anyone really want to know how their food is made? REALLY!

2} Tapioca is in no way a pudding, it’s insulting to actual puddings to even put it in the same category

3} It looks like frog spawn mixed with wallpaper paste