Be your own advocate

I’ve long been an avid supporter of being your own advocate, sometimes you just know when something isn’t right, in those instances you have to keep pushing until someone listens.

It took 2 months, 4 trips to the doctors, 3 different doctors, 2 wrong diagnosis, 4 different prescriptions and 1 trip to the breast clinic to finally find out what was wrong. 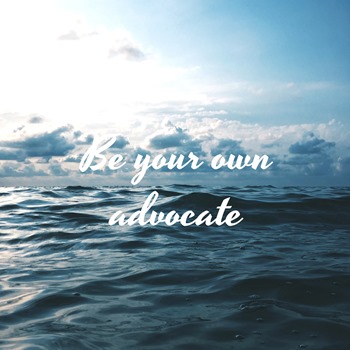 Photo by Giga Khurtsilava on Unsplash

My first doctors appointment had me being told I was suffering from an exercise injury which should clear up in 2/3 weeks.

My second doctors appointment had me being told I ‘being silly’ and suffering from health anxiety, essentially imagining all the pain I was experiencing.

My third doctors appointment had me being told again that I was imagining every thing and given drugs for anxiety and depression.

My fourth doctors appointment had them admitting that there was ‘something there’ and a breast clinic referral was made.

This all took place over 6 weeks or so. Every time I had to make a new appointment I doubted myself more and more, starting to believe I was going crazy and imagining it all, even though I knew something was wrong. Confessing to my partner that I thought I was going insane was a new low for our relationship, one I never want to repeat.

The two week wait over Christmas for my breast clinic appointment was horrendous, I expected the worst and swung between bouts of tears of desperation and fake joviality for the sake of our children.

My appointment left me with mixed emotions, sheer joy at being told my breasts have either cystic tissue or benign activity. In short, I have big boobs which need increased support and evening primrose tablets to adjust my hormone levels, over time this will eliminate the pain I’ve been feeling. The pain is horrendous, I’ve shed many a tear over the discomfort I’ve felt.

Being essentially placated by the gp’s has me wondering what happens next time I make an appointment for either myself or my children, will I again be given the run around for weeks on end?

Nothing was my imagination running away with me, the fact I’ve had mental health issues in the past, I believe, made it too easy for me to be dismissed as just suffering from an over active imagination. I realise that gp’s can’t recommend everyone they see for further testing/examination, and I’m not sure how they decide, I do know that I was dismissed/ignored for far too long.

Yes, it turned out to be something easily sorted, but I still have up to 6 months of pain before hopefully it is sorted. Pain that scared me witless, stopped me from sleeping, prevented me from participating in everyday family activities and ultimately pain that had me convinced I was about to die.

It without a doubt messed with me mentally. My children started to pick up on it and haven’t slept through the night for weeks upon weeks, they became incredibly clingy and tearful,  incidentally, last night they both slept through for the first time since this whole thing started!

I now also need to wean myself off beta blockers, which as a nice touch make the pain worse, oh joy! It’s been a testing time for our little family, one which could have easily sent me spiralling back in to depression, but it taught me a good lesson.

I know myself, I know when something is wrong, and I know when to keep pushing for an answer.

Be your own advocate.